What I learn about Cosmology

I am participating research program in the university with my professor.

What I am doing is Cosmology. More specifically speaking, Dark Energy.

First of all, what is cosmology?? Cosmology is a studying about the universe from beginning to future. One of things we had been curious was the fate of the universe.

However, in 1998, Hubble space telescope discovered that we were living in acceleration (≠expanding) universe by observing of the special type of supernova. In order to explain that the universe is acceleration, there must be a lot of energy to make the universe to accelerate.

The energy is called “Dark Energy”.

What is Dark Energy then? Actually, we do not know a lot of things about it. Only we know is it is the largest constituents of cosmic inventory. According to data from NASA, it accounts for about 70 percent of the universe. It causes the expansion of the universe to accelerate.

If we calculate the Friedman metric equations, the result shows that the universe will be dominated by Dark Energy. This means that only Dark Energy will exist, and matter will decay eventually.

We can come up with one question “Is the current constituent of cosmic inventory just coincidence?”.

Therefore, we modify the Lambda CDM model where we change the equilibrium points so that we can live in a stable universe where both matter and Dark Energy can exist.

This is the summary of what I research in the university. I want to learn and explain the detail later, but what I want to say is those are too complicated for normal people to enjoy Cosmology.

I want to find more familiar things for us to learn cosmology.

If I come up with nice topic, I will report it here.

Why Is Harmonic Series the Divergent Infinite Series

Special types of Recurrence Equations Seems this is one of the most difficult topics in EJU math ...

What I Want to Do

There are things I want to do in my life. Having those things is good enough to live. It is worth to live. I will ...

Quadrature by Parts (区分求積法) This is very similar way to calculate the area by Integration Let's take ...

One of the most beautiful things in Math It might not be such special thing for you. But I would like to...
スポンサーリンク
What I Want to Do
New Mexico 2017 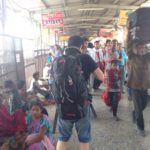 An online tutor for Japanese, Math and Physics. The area of my undergraduate research was Dark energy. Currently I am also available for supporting you in Osaka. ⇒Detail